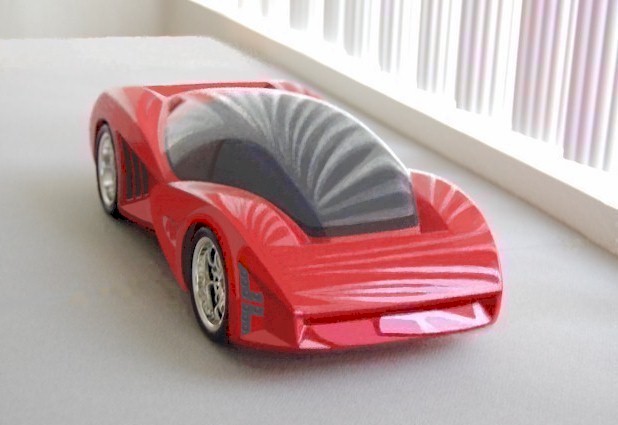 I've had an interest in car design since I was a kid, and  I trained informally with a GM designer when I was in college.  (That may sound a bit like Abe Lincoln reading law books in front of the fire, but they were willing to do things like that in the late 1960s.)

It didn't quite turn out to be a career for me.  GM liked my ideas, but felt I should get a year or two of design school, to give my drawings and renderings the kind of panache needed to convince executives to invest significant amounts of money in a design.  For my part, I was anxious to get out of academia and into the real world, so I went into something else altogether--television news (which was also a lot more open back in those days).

I've never quite lost my interest in car design, though .

Much later in life, when I found myself temporarily with a bit of free time, I decided to use some of it to mock up a design idea for a car that had been kicking around in my head for years.  The photos on this page show the results.

The car is designed as an assemblage of pods--one for each wheel, clustered around a large central pod for the people and powertrain.  There's also a kind of internalized spoiler that the air has to pass over before reaching the end of the car.

Forward illumination is provided by lights of a type that are already on many production cars, but without all the surrounding brightwork that conventionally makes them look like large eyes.  Clear lights would be used on the upper portion, for headlights and cornering lights, and amber ones would be used on the bottom, for turn indicators and fog lights.

Look closely, and you'll see that the bubble-like cockpit cover is actually  made up of a standard windshield, roll-down windows, and a removable targa top.  While I wanted this car to look somewhat futuristic, I also wanted the driver to be able to enjoy classic open-top sports car motoring.

The lower portion of the car doesn’t have the flat, all-encompassing NASCAR-style air dam that’s more or less standard on high-performance cars these days. Instead, the X1 takes its cues from the more complex and nuanced ground effects of Formula 1 cars--as well as from some practical considerations of everyday driving.

There’s greater overall ground clearance, so you don’t have to baby the car as much as today’s exotic cars tend to demand. You can go over a speed bump without worrying about the car’s undercarriage, and you can leave the driveway of an urban parking garage without scraping the nose.

The wheel pods extend lower than the rest of the body, to reduce the aerodynamic turbulence of wind meeting the front surfaces of wide tires. To avoid generating lift, the front wheel pods' lower leading edges are slotted in a V pattern, allowing oncoming air to pass through, but deflecting it to both sides around the tires.

The lower sections of all the wheel pods are made of squishy material that isn’t damaged by compression and contact with the road surface. 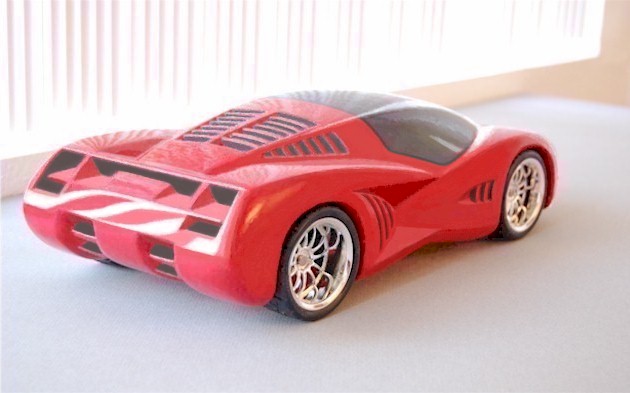 The engine compartment is louvered, in the manner of the hoods on many classic cars from the 1920s and 30s.  The louvers help cool the engine and allow it to breathe, as well as providing better rearward visibility than is typical for a car of this type.  On the production version, the louvers might be a bit smaller than I could render in a 1/10th scale model (i.e., closer to the dimensions of the hood louvers of the classic cars).

The way the fastback nestles down between the rear fenders is a very deliberate homage to the General Motors fastbacks of 1949 -1952, which are still sleek today.  The prominent rear wheel pods are also meant to suggest the powerful haunches of a racehorse--or the thrust of certain twin-engined, twin-tailed fighter jets.

A black digital display screen replaces traditional red glass taillights.  Although the screen's normal nighttime color is still red, it can also display a variety of other colors, patterns, and effects--for example, a more dramatic warning to following drivers in extreme braking situations. 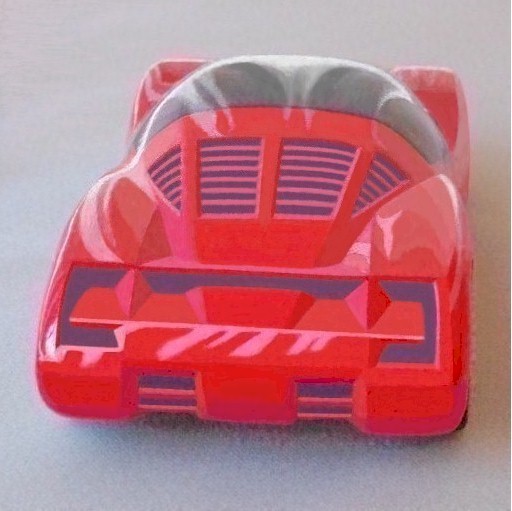 The effects of the extended front glass are apparent in the shot above.  The view from the passenger compartment is like riding in a glass-enclosed bubble nestled among the wheel pods.  This sensation is heightened by foregoing a traditional dashboard.   Other than a freestanding pod of gauges and controls for the driver, it's all just a single continuous ovoid sweep from the top of the windshield down to the floor.

In addition to providing visual drama and an enhanced sense of closeness to the road, this arrangement enables more and bigger things to be carried in the passenger compartment (as well as making it feasible to clean the interior surfaces of the glass). 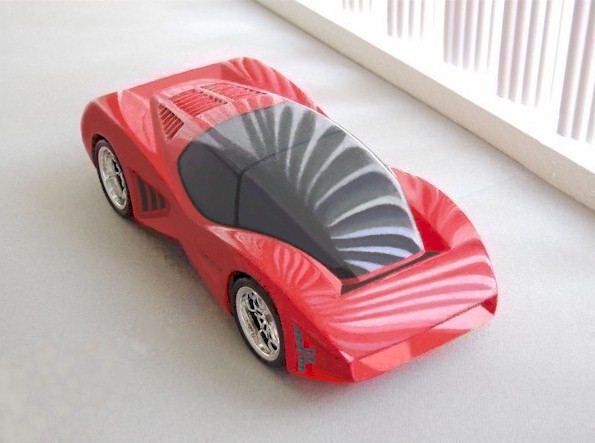 I've always liked the way classic cars of earlier periods, particularly the 1930s, created visual interest with their wealth of discrete body parts--fenders for the wheels, a hood for the engine, etc.--and I wanted to re-create some of that appeal in a contemporay package.

At the same time, I wanted modern aerodynamics and sleekness, as well a kind of taut coherence to the design,  with the various component pods coming together into a single, integrated shape.  I think that objective is probably most evident in the car's 3/4 views. 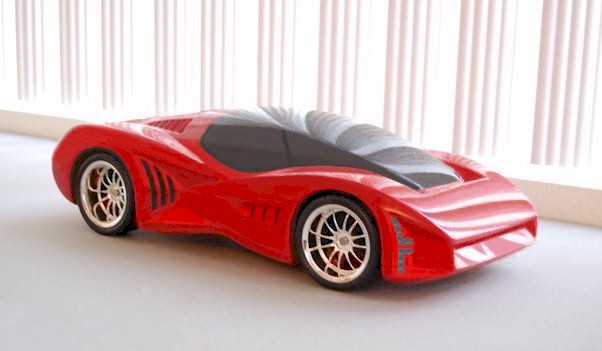 Creating this mockup was an exercise I'm glad I went through.  Among other things, working in three dimensions from the outset enabled me to see how much variety and interest could come just from looking at relatively simple shapes from different angles.  This effect emulates a kind of "complex simplicity" that I've long admired in certain forms of Japanese design.

Footnote:   After my mockup was completed and photographed, I went to Art Center College of Design in Pasadena, where a lot of top automotive designers train, to see how the design stacked up.

While I was struck by how much more polished the Art Center students' presentations were, I was satisfied to see that my own design was able to generate visual interest and excitement from a structure that, as far as I can tell, would be thoroughly buildable (as well as practical and fun to drive).